No visitors. No nights spent away from the apartment. No disturbing the other residents, all of whom are rich or famous or both. These are the only rules for Jules Larsen’s new job as an apartment sitter at the Bartholomew, one of Manhattan’s most high-profile and mysterious buildings. Recently heartbroken and just plain broke, Jules is taken in by the splendor of her surroundings and accepts the terms, ready to leave her past life behind.

As she gets to know the residents and staff of the Bartholomew, Jules finds herself drawn to fellow apartment sitter Ingrid, who comfortingly, disturbingly reminds her of the sister she lost eight years ago. When Ingrid confides that the Bartholomew is not what it seems and the dark history hidden beneath its gleaming facade is starting to frighten her, Jules brushes it off as a harmless ghost story—until the next day, when Ingrid disappears.

Searching for the truth about Ingrid’s disappearance, Jules digs deeper into the Bartholomew’s dark past and into the secrets kept within its walls. Her discovery that Ingrid is not the first apartment sitter to go missing at the Bartholomew pits Jules against the clock as she races to unmask a killer, expose the building’s hidden past, and escape the Bartholomew before her temporary status becomes permanent.

⊕ It’s definitely easy to read, you don’t need to use your brain all that much to be able to enjoy it. Since it’s very fast paced, you will be turning the pages one after the other like a maniac and you can fly through it in a single day. “Lock every door” is perfect for a day at the beach or a for cozy winter night by the fire place, this is definitely a cozy thriller.

On the other hand the whole premise of this book is so unbelievable to me and the ending just unsatisfying for my personal tastes. I didn’t have any connection with the characters and their choices were very questionable.

Someone We Know // Shari Lapena

Maybe you don’t know your neighbors as well as you thought you did . . .

“This is a very difficult letter to write. I hope you will not hate us too much. . . My son broke into your home recently while you were out.”

In a quiet, leafy suburb in upstate New York, a teenager has been sneaking into houses–and into the owners’ computers as well–learning their secrets, and maybe sharing some of them, too.

Who is he, and what might he have uncovered? After two anonymous letters are received, whispers start to circulate, and suspicion mounts. And when a woman down the street is found murdered, the tension reaches the breaking point. Who killed her? Who knows more than they’re telling? And how far will all these very nice people go to protect their own secrets?

In this neighborhood, it’s not just the husbands and wives who play games. Here, everyone in the family has something to hide . . .

You never really know what people are capable of.

⊕ This was such an enjoyable little mystery· I read this in a single day. I was so immersed in the story that at some point I felt like I was right there alongside the characters. I enjoyed this far more due to the characters than the actual mystery which I found to be a little lackluster. The characters are well developed and drawn out and the mystery is very engaging but kind of… like it’s there for the sake of it. This isn’t without its faults but I highly recommend “Someone we know” to everyone who loves a mystery that feels like a T.V miniseries.

The Other Mrs. Miller // Allison Dickson 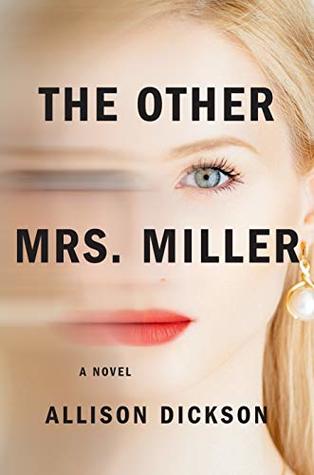 Two women are watching each other.

Phoebe Miller isn’t sure when the rusty car started showing up in the cul-de-sac she calls home, or why its driver would be spying on her. What could be interesting about an unhappy housewife who drowns her sorrows in ice cream and wine and barely leaves her house?

Only one knows why.

When a new family moves in across the street–the exuberant Vicki, who just might become the gossipy best friend Phoebe’s always wanted, and her handsome college-bound son, Jake, who offers companionship of a different variety–Phoebe finds her dull routine infused with the excitement she’s been missing. But with her head turned she’s no longer focused on the woman in the car. And she really should be…

An addictive domestic thriller for fans of The Last Mrs. Parrishand The Couple Next Door, The Other Mrs. Miller serves up a delicious brew of dark secrets and stunning plot twists that will keep you captivated until the very last page.

⊕ Oh this was such a huge disappointment for me. When I started reading “The other Mrs Miller” I felt like this would be my new favourite summer read but alas once again I am left utterly disappointed. The first half of this book is pretty good and the way the story was progressing it looked like it was going somewhere. But then something changes and we are left with a story that is very unbelievable with a bunch of dare I say dumb characters? Yes, I do dare. This was a  2.5 out of 5 stars for me but a lot of people are giving this 4 and 5 star ratings. So what do I know?